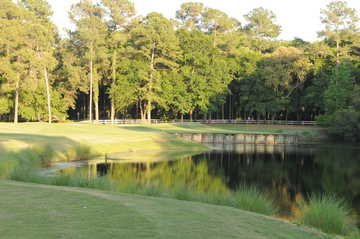 Cupp Course at Palmetto Hall: View from no. 16

While Hilton Head is chock full of courses designed by some of the greatest names in golf, just one of them was designed with a computer to give it lines straighter than an arrow throughout.

The Robert Cupp Course at Palmetto Hall can be one of the most interesting and eclectic courses you'll play, as well as possibly one of the toughest. From the back tees the course plays to 7,079, with a slope rating of 144.

Named as Golf World's top designer in 1992, Cupp created a course that is visually challenging as well as challenging to play. With sand traps looking as if they were drawn in by, well, a computer, this is a course you'll tell your friends about, though you may not tell them your score.