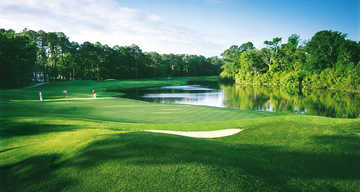 The experience of playing the Arthur Hills Course at Palmetto Hall takes on an added dimension when you discover that the golf course was built on an old Civil War garrison. History aside, however, the Hills Course, which opened in 1991, stands proudly as yet another grand achievement by the legendary Ohio-born designer.

"At Palmetto Hall, golfers have to deal with another element when they miss their mark - the rough," said former TravelGolf.com writer Shane Sharp. "The cabbage is grown thick in the summer months, consisting of a deadly blend of Bermuda around the greens and Bahia along the fairways.

"Arthur Hills can be notorious for creating difficult courses like his course at Palmetto Hall. This course really demands accuracy or you can put some big numbers on your scorecard."

Playing the forward tees will give resort golfers enough of a challenge to keep them happy, while better golfers will be heavily challenged from the tips, which play nearly 7,000 yards, with a slope of 136.