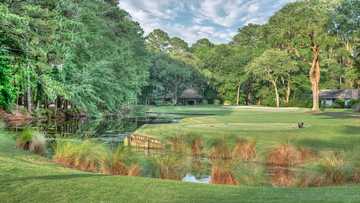 View from no. 4 on Dolphin Head Golf Course

The Dolphin Head Golf Club, originally designed by Gary Player and Ron Kirby and built in 1974, was the first golf course developed at Hilton Head Plantation.

A trademark of Dolphin Head is the slight elevation of the greens from the approach-shot area and the numerous mounds, which accentuate the greens.

Under the direction of renowned golf course architect Clyde Johnston, Dolphin Head Golf Club's greens were rebuilt in 1993. Most recently, all bunkers were completely rebuilt, and four new fairway bunkers were added in strategic locations. A major tree-thinning program has been under way in the last few years to allow more sunshine to reach tees and greens.